Skip to content
Previous Next
14 Fast Facts About Costa Rica 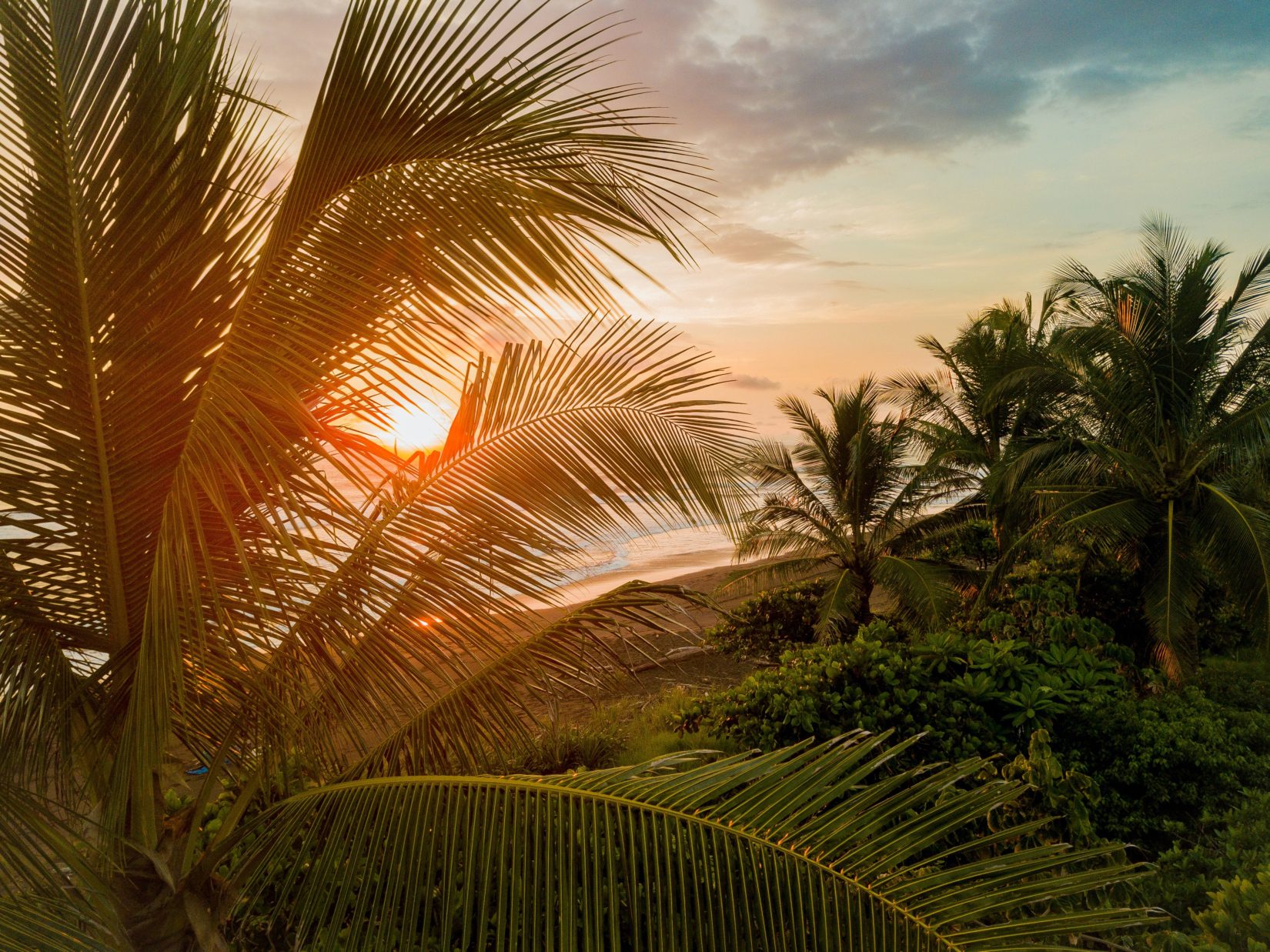 So, you’re after facts about Costa Rica? You’ve come to the right place. This guide deals with some of the most often asked questions related to this lush and verdant land between the Caribbean Sea and the Pacific Ocean. It contains all of the details on the famous rainy season (also known as the Green Season) and the top attractions in the home of Pura Vida, from smoke-billowing Arenal Volcano to the surf beaches of the Nicoya Peninsula. Let’s take a look…

1. Why is Costa Rica so popular?

There are loads of reasons why Costa Rica is a popular tourist destination and draws in millions of visitors per year. One of the main attractions for visitors is that Costa Rica is considered the home of ecotourism. Tourists can come to stay in lodges up in the cloud forests of Monteverde or hike trails in Manuel Antonio National Park looking for rare birds, orchids and monkeys all done in a sustainable friendly way. But there’s more, because Costa Rica also boasts white-sanded beaches on the Caribbean and wave-lashed surf towns on the Pacific. You’ll also find adventure-tourism meccas like Arenal, which is great for whitewater rafters, hikers, and waterfall lovers.

2. What is the most beautiful part of Costa Rica?

There are many beautiful parts of Costa Rica. Some would say that the Nicoya Peninsula is the most beautiful area, thanks to its long stretches of cinnamon-tinged sand washed by perfect surf waves. Others might call the most beautiful part of the Costa Rica the Corcovado reserve, where old-growth rainforests tumble into the aqua colored Pacific ocean waters inhabited by dolphins. You also get the inland areas of Monteverde – the home of lush cloud forests – and the northern plains, which are spiked by huge, smoking volcanos. Finally, the Caribbean side of the country offers very remote beaches of shimmering white sand. 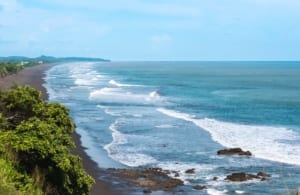 3. Which part of Costa Rica has the best beaches?

Costa Rica has 800 miles (1,290 kilometers) of coastline, which means tons of  beaches. Surfers often argue that the best beaches are in the regions of Nicoya and Guanacaste; areas blessed with long runs of coffee-tinged sand below verdant mountains. Further south, the Manuel Antonio National Park has an isthmus beach that some hail as the most beautiful in Latin America (it’s got howler monkeys and sugar-colored sand). Then there’s the whole of the Costa Rican Caribbean. The playas of Cahuita and Puerto Viejo are the stars there, offering aqua colored seas shaded by stooping coconut palms.

Costa Rica is famous for being one of the happiest countries in the world. The locals – called, simply, Ticos – follow the motto of Pura Vida. It means enjoying the simple things and savoring the moment. On top of that, Costa Rica is famous for producing some of the world’s very best coffee, most of which is cultivated in the humid valleys of San José and Puntarenas. And then there’s the incredible flora and fauna. The country covers a mere 0.03% of the planet but it has approximately 6% of the world’s total biodiversity, including – of course – the famous three-toed sloth! 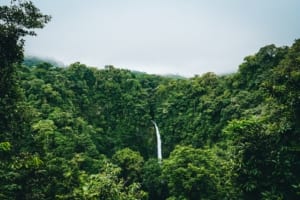 5. What is the most visited place in Costa Rica?

San José remains the most visited place in Costa Rica. It’s the country’s capital and hosts the biggest airport, the Juan Santamaria International Airport. The majority of travelers won’t stick around there too long, though. Some will break out westwards to the surf beaches around Jaco or go straight to the adventure tourism hub of La Fortuna. Others make for Monteverde to see the cloud forests or go southeast to the ramshackle Caribbean town of Puerto Viejo de Talamanca for rum-fueled nightlife on a paradise coast.

6. Which part of Costa Rica is the best to stay?

That’s really up to you. It all depends on what you want out of your trip to Costa Rica. The Pacific Coast is definitely the best place to stay if you came here to surf. Places like Santa Teresa or Tamarindo are riddled with surf camps and sit just feet from world-class breaks. Nature lovers are bound to prefer destinations like Santa Elena, which is the gateway to the protected canopy reserves of Monteverde, or La Fortuna, which sits on the cusp of the amazing Arenal Volcano National Park. But that’s really just scratching the surface.

7. What should you not miss in Costa Rica?

There are an abundance of things that should be on any Costa Rica bucket list. You definitely should not miss the incredible vistas of Arenal Volcano and Lake Arenal should be close to the top. So should the surf beaches of Jaco or Santa Teresa, which have Pacific Ocean breaks for all skill levels. It’s also hard to ignore the lush coastal jungles of Manuel Antonio National Park, which might be small but still manage to host everything from green iguanas to three-toed sloths. Adventure-hungry travelers should also consider the Poás Volcano National Park, a Costa Rica hiking mecca.

8. What are 3 tourist attractions in Costa Rica? 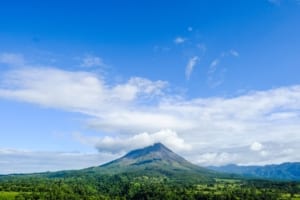 Three tourist attractions in Costa Rica worth knowing about are the Nicoya Peninsula, Arenal Volcano, and the Monteverde cloud forests. The Nicoya Peninsula is a beautiful region of lush jungles that’s entirely surrounded by the Pacific Ocean. It’s probably most famous for its surfing, which happens in towns like Tamarindo and Mal Pais. The Arenal Volcano is a striking, cone-shaped mountain that’s still active and is surrounded by waterfalls and lakes. Then you have Monteverde, where travelers go to spot unique wildlife on canopy walkways.

Explore Why You Should Travel to Costa Rica with The Explorer’s Passage.

9. How much does a vacation to Costa Rica cost?

The cost of a vacation to Costa Rica can vary. It all really depends on what you are looking for. There are luxury eco lodges in the jungles that cost thousands of dollars per night. But there are also relaxed surf hostels that are relatively inexpensive. Costa Rica offers a range of experience that can fit any budget. We would say that you should budget anywhere between $850 USD to $3,500 USD per week for your trip.

10. How many days do you need in Costa Rica?

That all really depends on what you are looking to do in Costa Rica. If you only have a few days  in Costa Rica you can visit the restaurants, bars, and historical sites in the capital of San José. However, you’ll need longer if you want to break out to the rainforests and the coastal areas. We would say you need approximately 7 days / 6 nights in Costa Rica in order to fully experience the different parts of the country. During a weeklong trip you would be able to experience San Jose, the famous Arenal Volcano as well as some days soaking in the sun on the white sand beaches on the coast. If you have more time we would recommend staying at least a week on the Pacific coast surfing and sunbathing, along with a week hiking and exploring the jungles and visiting Arenal. Any extra time that you may have could then be used to travel across to the Costa Rican Caribbean.

Visit our Custom Travel page to learn how you can create your dream trip with The Explorer’s Passage. 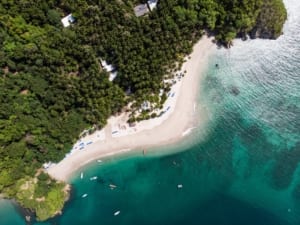 Costa Rica is considered a generally safe to visit. There are millions of annual visitors to the country, and many of those are solo travelers. Of course, you’ll need to exercise caution as you would visiting any travel location. There’s occasional petty crime, particularly in major cities like San José and resorts like Jaco. And there are other potential hazards, like poisonous snakes in the jungles, not to mention crocs and sharks in the oceans. We recommend that you get a good travel insurance policy and travel sensibly.

Costa Rica is a great destination to travel to all year around. However, the best time of year to go to Costa Rica for most travelers is during the dry season. That runs between late November and March every year. Average rainfall dips considerably at this time, while average temperature highs hover around 74°F to 77°F  (23°C – 25°C). It’s great beach weather, but also cooler for hiking and seeing the wildlife. Just bear in mind that the dry season gets busy and everything from hotels to flights is likely to cost a little more, making April to October an awesome time to visit Costa Rica as well.

13. What is the rainy season in Costa Rica?

The Costa Rica rainy season is also known as the Green Season because of the effect that it has on the jungles and the mountains in this beautiful country.  The Green Season is a great time to experience the lush rainforests of Costa Rica. It runs roughly in line with the Northern Hemisphere summer, from May until November each year, and is characterized by high precipitation, peaking at over 12 inches each month in September and October. There are upsides to visiting at this time. It’s cheaper for one, but also the surf is generally better on the Pacific coast.

14. When should you not go to Costa Rica? 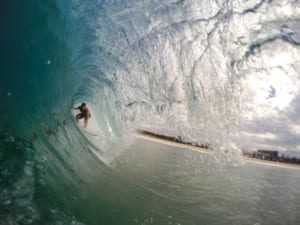 There’s rarely a time you should not go to Costa Rica. Even the Green Season (the rainy season) has its draws, bringing the forests to life with orchid blooms and tropical birds. Nature lovers often try to time their trip for the break in the rains that usually comes in June or July. What’s more, the rainier months usher in good surf on the Pacific. On the flip side, budget travelers might not want to come during the height of the dry months in January and February, because flights, hotels and tours will cost extra.

If you are interested to learn more about our adventures to Costa Rica, email us at info@explorerspassage.com or click HERE.

I look forward to seeing you in Costa Rica!